You are here: Home1 / Diet2 / The Advice to Eat Less and Exercise More Is No Longer Valid

If you are a health professional and are still declaring that eating less and exercising more is a viable plan for weight loss, it is high time you stop this.

Eating less and moving more is an outdated concept that the public already knows is flawed and it only reflects poorly on healthcare professionals who still mistakenly promote it. 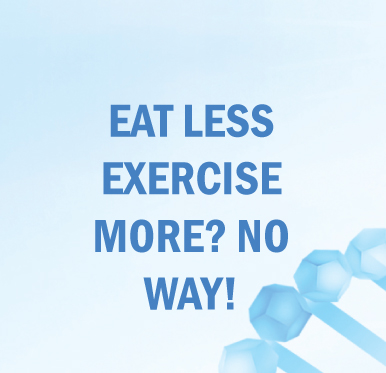 Eat less and exercise more as a solution to achieving weight loss or improving health is a pre-critical mass and a pre-evidence-based story and concept.

This story has been told and repeated for more than 50 years and has its foundation in assumptions rather than being based on science or research. This story was never reassessed or updated over time, even though much new information has come to light over the years. Even stranger, it was also never questioned despite outcomes continuing to fail and the situation worsening.

Hundreds of thousands of people have tried this embarrassing model in the shape of every conceivable major diet program that has been offered over the decades and preaches eating less (daily calorie restriction) and moving more (more recreational physical activity). This has resulted in the public moving to the post-critical mass awareness of this subject.

As the fairy tale continued to be promoted, governments added a twist by wrongly attacking fat and especially saturated fat and cholesterol. This led to these diets not only being converted to low calorie, but also to low fat.

This conventional model of weight loss is directly responsible for the cursed phenomenon of Yo-Yo dieting and all the misery, disappointment, and eventual worsening of weight issues that followed as a result.

As Americans have tried this model over and over again, they know it simply doesn’t work. Over the years, they have listened to their doctors, the government and nutrition experts who have developed new marketing and packaging of the same old concepts. To do this, they’ve used new shake mixes, supplements, pills, powders and potions, but all of these are ultimately still attached to the same old tired party line of, “eat less, and move more.”

The collective consciousness knows that this model simply doesn’t work and each time a person in authority, a health professional, or a trusted doctor recites the same old excuse of a solution that they know doesn’t work, it only serves to build more resentment and frustration.

This results in the professionals undercutting their value and trust, and this makes them look bad and as outdated as the advice they give.

If anyone tries to tell you that “it’s simple and you just need to eat less and exercise more,” and you feel put off, ignored, or even lied to, you just may be right on all three counts. The good news is that you don’t have to accept it.

Doctors and health professionals, we urge you to do your homework and not continue making this mistake.

Keep following us. Together, we can do better and there is a better explanation and a more effective approach.

It is time for the Modern Lifestyle Medicine paradigm to stand tall and leave that old dangerous model in the shadows where it belongs.

We can do better!

Exercise Will Improve Your Immune Function
Scroll to top